A long period of ill-health including osteoarthritis, Ménière’s disease, chronic sinusitis, spinal, shoulder and elbow surgeries, depression and skin cancer had taken its toll on her immune system and, with it, her quality of life.

With a compromised upper-respiratory system, Julie found herself constantly battling colds and influenza.

“I just kept getting sick again and again,” said Julie, who put it down to the impact stress and fatigue were having on her immune system.

Having already endured numerous procedures including inner-ear and orthopaedic surgeries and chemotherapy for skin cancer in the past, Julie this year found herself faced with another trip to hospital – this time for painful shoulder surgery.

But this time she started taking Fatigue Reviva on the recommendation of University of Newcastle researcher Professor Tim Roberts a week before her operation, knowing the impact surgeries had taken on her health in the past. She was desperate to keep well and recover quickly.

The impact of Fatigue Reviva has been profound.

“Going through surgery, especially shoulder surgery, is a shock to the system,” Julie said.

“I had eight bouts of respiratory illness within the last year – two of those were ’flu – and in all I consumed many rounds of antibiotics.

“Having been through shoulder reconstruction and the resultant physical and mental stress associated with that, including all of my other health issues, I am surprised that I am in such a good physical condition and a calmer mental state four weeks after surgery.

“Usually I would dip down into depression, pick up any cold doing the rounds, break out in cold sores and experience a lot of arthritic pain. Just days after surgery, I was up and about, pounding the corridors of the hospital doing up to two kilometres of walking a day.

“When people see me they are also surprised that I am looking so well.”

Julie is now discovering the benefits of Fatigue Reviva on her daily life with just a single dose a day.

The busy mother and grandmother has since been exposed to respiratory tract infections through her close family. But while the rest of her family have suffered through the winter period with colds and influenza, Julie has amazingly not been sick.

“That’s extraordinary for me,” she said. “Normally I keep a box of tissues in every room of the house nor do I leave home without a tissue supply.

“When I go down I get really, really sick. I need double doses of antibiotics, then it will take a month to get over it.

“Fatigue Reviva is the only thing I’ve done differently.”

Now feeling better than she has in years, Julie is able to take on life – and her duties as president of cancer support group Bald And Beautiful Foundation Ltd – with renewed vigour.

“It’s a pleasure to be feeling well and energised so I can enjoy exercising, and do my bit for the community through the Foundation and my Rotary Club,” she said with delight. 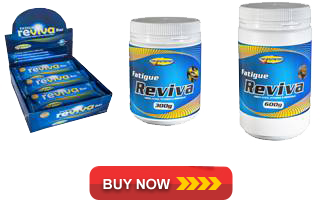